During the height of summer, attics in most regions of the country can reach temperatures up to 150 degrees Fahrenheit, and that heat radiates into the rest of the house. One way to cool the house and save on your utility bill is to install an attic fan, which pushes hot air out of the attic and draws cooler air in through soffit vents.

Even on an extremely hot summer day, circulating outside air through the attic can lower the temperature significantly, keeping your home cooler and mitigating the need for air conditioning.

Solar attic fans save even more money as they draw their power from the sun instead of electricity. They are also easier to install because no wiring needs to be extended into the attic. Both electric and solar attic fans can be installed directly into a gable (although, with a solar fan, the solar panel will be on the roof and connect to the fan with wires). Both types of fans can also be thermostatically controlled so they turn on and off at a pre-set temperature. Make sure you purchase a fan that is the right size for your attic and will move enough air to be effective—a larger attic may even require two fans. Also, be sure that your attic has enough soffit vents to draw enough cooler air in.

Installing an attic fan is a task you may want to leave to a professional. If you do plan to install it yourself, you’ll need the skills to cut into the roof (and the gabled end of the attic if you don’t already have a louvered vent) and run electricity up into the attic if you’re buying an electric fan. 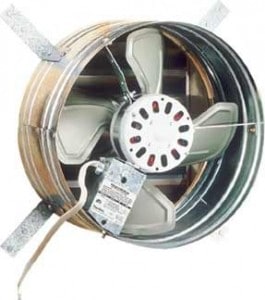 Electric gable fan vents when it’s powered on, closes when off. Buy on Amazon.

Mount an electric fan behind the gable vent—a louvered vent will open and close automatically when the fan turns on and off, making it a better option than a simple screened opening for keeping moisture and debris out of your attic.

Make sure the fan is securely attached to studs or rafters on either side of the vent—if they’re too far apart, securely anchor two 2 by 4s horizontally between the studs and attach the fan to them.

For a solar fan, you’ll need to cut a hole in the roof to fit the solar panel and the fan itself (unless you’re using a solar fan that is mounted in the gabled end—then you’ll still have the solar panel on the roof, wired to the fan below in the attic). Follow the manufacturer’s measurements to cut the correct size hole, then install the fan and add flashing around the panel to prevent leaks.

An electric attic fan can save you about 10 percent off your cooling costs, depending on the climate where you live and the amount of insulation in your house. A solar fan will be more expensive up front, but since it won’t add to your electric bill it will save you more money in the long run.