How to Avoid Buying a Money Pit | HomeTips Is it or isn’t it a money pit? Though tired and worn, this house has great architectural style.

Though the movie is hilarious at times, the reality of getting in over your head is more tragedy than comedy.

Broadly speaking, a totally “together” house is more expensive than a fixer upper and offers less opportunity for growing its value—that’s why first-time homebuyers frequently opt for a fixer upper. A new coat of paint and other curb appeal improvements almost always jack-up the price for the buyer. Getting a great deal often means buying a house that needs TLC. The challenge is to find a house that is fundamentally sound but can be affordably improved in ways that increase its value, beauty and comfort. Before buying any house, you should hire a qualified home inspector to scrutinize it and give you a thorough report. But before you make an offer and spend several hundred dollars for a home inspector, here are a few things you can check yourself to determine whether a fixer upper is worth the price of admission.

Most importantly, the house should stand on a sturdy foundation: a steel-reinforced concrete perimeter foundation wall and footing. The house’s structure should be straight, square, and solid. When you view the house from a distance, it should stand straight, and not lean or bulge in places. When you site down exterior walls, they should appear straight and plumb.

Floors should be flat, level and strong. Uneven or non-level floors—and doors that don’t swing right or fit properly in jambs—often indicate settling or other structural problems. When you gently jump up and down at the center of a large room, the floor shouldn’t feel springy. If it does, the floor joists may need additional support.

Big cracks are red flags. Large, V-shaped cracks in the foundation are often serious signs of structural issues that may require expensive foundation work. Interior walls with diagonal or clean, jagged cracks can be signs of movement or settling caused by unstable soil or drainage issues, which can be difficult to solve. Unless the house is located in earthquake country, a jagged crack in a plaster wall may signal house settling.

Don’t worry about minor wall cracks at the corners above windows and doors and vertical cracks in line with wall studs —you can usually just fill and paint these. Loose downspout connection means water has probably been pouring down on the foundation.

Gutters and downspouts should effectively carry water away from the house, and the lot should be graded to direct runoff away from the foundation. Otherwise, the house could have damage from poor drainage. If the house has had drainage problems in the past, it will probably have them in the future unless the underlying causes have been handled. If it has a basement or crawlspace, look for signs of flooding, such as moisture or water marks on the foundation walls.

Where signs of moisture exist, mold can grow. Some types of mold are harmless and easily removed, while others may require expensive abatement. Professional inspection is needed for mold. New copper piping is a major plus. Replacing an old furnace is a major expense.

Check out the age and type of the heating system and whether all of the rooms are heated. If the heating system is severely out of date, replacing it will cost several thousand dollars. If you plan to install AC, it would be best to do this when you replace the furnace. 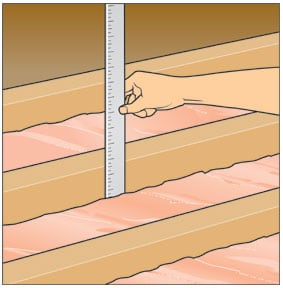 You can use a ruler to measure depth of existing insulation in the attic.

Check the attic and walls for insulation. Installing more insulation in an attic isn’t normally a big job, but insulating existing walls can be pricey. To see whether exterior walls are insulated, you can remove an electrical outlet cover and look next to the electrical box (be careful not to touch any bare wires or the outlet’s electrical terminals.)

You can often tell if a roof leaks by checking the ceiling and the attic for water stains. Most roof repairs are inexpensive, but replacing a roof can be costly. So try to discern whether the roof will last for several years. If necessary, you can use a pair of binoculars to inspect the roof from the ground. Asphalt roofing shingles requiring repair are marked on this roof. You can extend the life of a roof like this with basic repairs, but it ultimately will need to be replaced.

Asphalt fiberglass (composition) roofing is by far the most common type. When it becomes brittle and the shingles lose their mineral crystals from the surface, the roofing needs to be replaced.

Wood shingles and shakes are over-the-hill when they’re badly cupped or missing altogether. In fire-prone areas, most wood roofing is not fire safe.

Other materials, such as tile, concrete tile, slate and fiber-cement last a long time. If the roof is covered with one of these, it’s probably okay.

Last but not least, it really helps if the house has “good bones”—in other words, a general layout and architectural appearance that make sense. If it has elements of a recognizable style—such as Craftsman or Cottage—that’s even better. Symmetry, balance and other elements of design can be the building blocks for creating a home that is really special.

This article, written by HomeTips’ Don Vandervort, was originally published by USNews.com