A helpful explanation on how a toilet works, with toilet plumbing diagrams and definitions of toilet parts.

Start by familiarizing yourself with the basic workings of a toilet. Refer to the illustration at right.

A toilet has two main parts—the tank and the bowl. The bowl holds water and connects to the drain for disposing of waste water and waste. The tank, which sits up behind the bowl, contains reserve water for refilling the bowl plus the devices for flushing clean water into the bowl and refilling the tank. One of these devices—called a ballcock—is connected to the water supply and controls delivery of water to the tank. When the tank’s water rapidly drops down into the bowl (upon a flush), the pressure causes the bowl’s waste water to go down the drain. The drop in water level is sensed by a float, ball, or pressure gauge, and this triggers the ballcock to refill the tank.

What is a flapper valve?

When a conventional toilet is flushed, water from the tank rushes into the bowl through an orifice called the flush valve. Before you trip the lever, this valve is plugged with a rubber stopper, called a tank ball, flush valve seat ball, or the newer, more effective flapper or flapper ball. 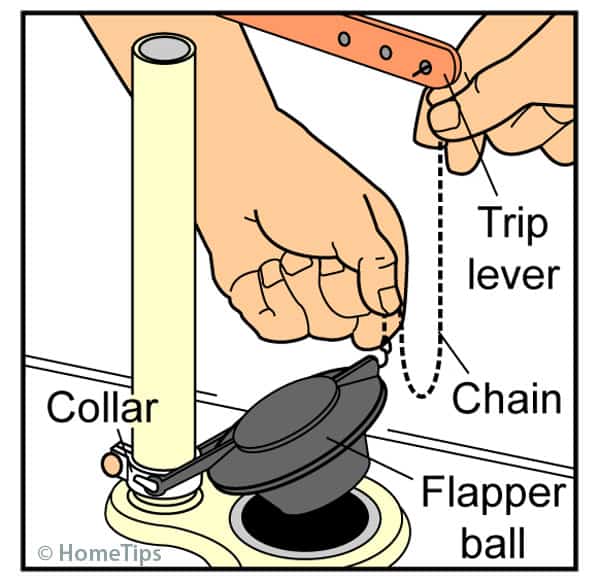 The valve and the flapper together are called—not surprisingly—the flapper valve. Tripping the lever simply lifts the rubber flapper off the valve and…whoosh, the water flows into the toilet bowl!

A flush valve is 2 1/2 inches in diameter as is the ball-shaped part of the flapper. The flapper hinges onto the vertical overflow pipe that’s next to the valve, and a small chain connects the flapper to the trip lever. The advantage of a flapper over the earlier stoppers is that it doesn’t have as many parts to foul or get hung up so it’s less likely to let the tank “run” or leak into the bowl.